Are you charging your phone safely?

A mistake that perhaps many of us are guilty of making is the way we charge our phones. Phone batteries are known for going flat at the most annoying of times. The most sensible way of charging a phone is on a worktop away from wet areas or soft furnishings. However this can also mean that you might miss an important phone call or can’t continue with that live chat in comfort!

Inadvertently this can lead to dangerous methods of phone charging which leaves the phone at risk of overheating and causing a fire.  In the past there have been cases of housefires which were caused by the householder charging their phone under a pillow. Whilst this situation could easily be rectified, we reckon that lots of people are guilty of charging their phone under their pillow without realising how dangerous this could be.

When phone charging can become dangerous 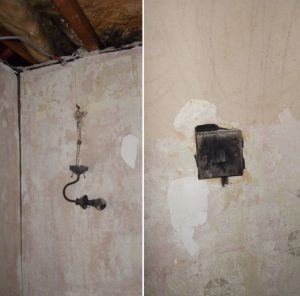 As electricians in Hertfordshire we are seeing increasing electrical jobs where we are repairing electrical damage caused by using the wrong type of charger when charging items such as smartphones. Typically this is when universal chargers are being used which are not compatible with the type of phone being charged.

When the wrong charger is used, it can cause expensive damage to the phone itself and your home electrics. It can even start a house fire or explode leaving you with serious burns. The socket quickly overheats and damages the wiring within the wall. This is why we do not recommend the use of universal chargers for any electrical device.

We recently attended a fire damaged property in Hertfordshire which was believed to be caused by a faulty phone charger. You can see from the photos on the right the level of damage which can be caused by simply using a faulty or incompatible phone charger.

Charge your phone on a hard surface

Charging using a genuine phone charger is safe so long as the manufacturers instructions are followed. However this doesn’t rule out an electrical fault developing which could still result in a fire. This is why it is important that you charge your phone in a sensible location at all times. If the worst does happen and a fire occurs when charging, the fire is unlikely to spread as quickly if the phone is situated on a hard surface such as a table top. Soft furnishings such as bedding, cushions, and rugs can often act as fuel to the fire which can quickly spread to other areas including wiring inside walls.

If you suspect electrical damage has been caused by using an incorrect charger, please contact a qualified and registered electrician as soon as possible.